Assault Weapons “Not for Hunting” but “Good for Home and Battle” 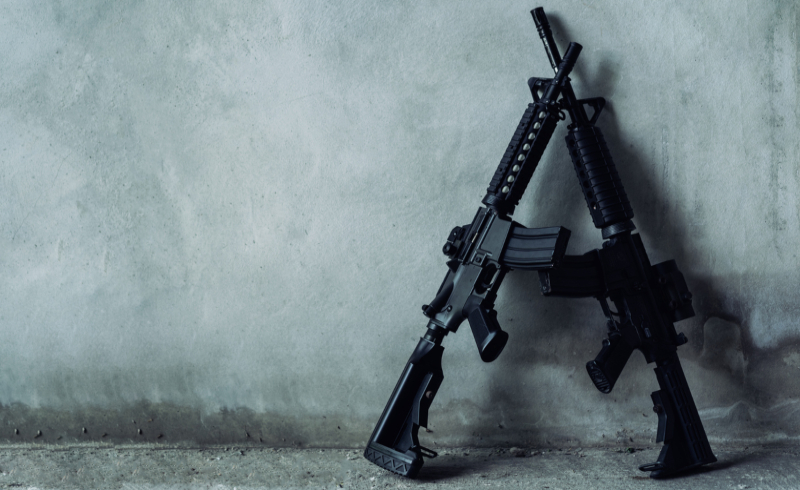 During a stop on his “America First” pro-Trump rally tour with conspiracy theorist Rep. Marjorie Taylor Greene (R-GA) in Dalton, Georgia on Thursday, May 27, 2021, Rep. Matt Gaetz (R-FL) told an audience of supporters that he believes Americans have “an obligation to use” the Second Amendment, particularly in the fight against so-called “cancel culture” in Silicon Valley.

Gaetz also told his audience, “The internet’s hall monitors out in Silicon Valley, they think they can suppress us, discourage us … Well, you know what? Silicon Valley can’t cancel this movement. Or this rally. Or this congressman.”

And, finally, Gaetz blared out and laid bare the long held open secret that right-wing gun advocates have contended as the prime reason the founders included the Second Amendment of the U.S. Constitution:

As the anti-choice coat hanger patriarchal Christian white supremacist warriors hung nooses and spread feces on Capitol grounds on their mission of destruction rummaging around to lynch the Vice President and overturn a valid and official election on January 6, 2001, these same “warriors” and millions of others like them fight violently to sanctify their “reading” of the Second Amendment.

They do this while simultaneously fighting every day to deny other people their voter rights, civil rights, LGBTQ rights, women’s rights, rights to a fair and impartial judicial process, immigrant rights, freedom of and from religion, the Constitutional balance of power, and, in particular, we the people’s rights to safety from firearms.

In Gaetz’s case, he seems to be attempting to divert attention away from impending criminal indictments of sex trafficking with underaged girls.

Only two weeks following Goetz interpretation of the Second Amendment, a federal judge in San Diego, California seemed to concur by overturning a 32-year ban of that state’s assault style weapons as a “failed experiment” that violates constitutional guarantees to bear arms.

Benitez handed down his ruling even though the federal government imposed a similar ban for a period of 10 years initiated during the Bill Clinton administration, which was never struck down as “unconstitutional” by the Supreme Court.

The Public Safety and Recreational Firearms Use Protection Act, or the Federal Assault Weapons Ban, a subsection of the Violent Crime Control and Law Enforcement Act of 1994, prohibited the manufacture of certain semi-automatic firearms, defined as assault weapons, and some types of ammunition and “large capacity” magazines for civilian use.

The law expired in 2004 in accordance with the law’s “sunset provision.” It was not reinstated.

“This case is not about extraordinary weapons lying at the outer limits of Second Amendment protection,” he argued. “The banned ‘assault weapons’ are not bazookas, howitzers, or machine guns. Those arms are dangerous and solely useful for military purposes,” his ruling emphasized. “Instead, the firearms deemed ‘assault weapons’ are fairly ordinary, popular, modern.”

Crack cocaine and so-call “designer” drugs are also “fairly ordinary, popular, and modern,” but does this make them safe and appropriate for largescale sale?

Benitez went on to state in his ruling:

“Like the Swiss Army knife,” he contended, “the popular AR-15 rifle is a perfect combination of home defense weapon and homeland defense equipment. Good for both home and battle.”

So, “like the Swiss Army knife,” one can take their AR-15 on a lunch outing in the woods to uncork a lovely bottle of French wine or clean one’s fingernails after an afternoon of planting petunias in the garden. And what about cutting red construction paper to fashion a brilliant large heart for one’s valentine?

Just think about the possibilities of how this is good for both home and battle next time one wishes the kill the Vice President or even the President and the entire Congress each time one’s candidate’s election was “stolen,” or each time Jews deploy their space lasers to burn down rich forested lands, or when Satan-praying pedophiles eat children in one’s town, or when Silicon Valley tech companies deprive one of their precious social media platforms.

One can also go into battle by traveling to Italy to take out the people who created and activated Italian military satellites that forced U.S. voting machines to switch Trump votes to Biden’s column.

Indeed, “good for both home and battle.” But Benitez’s ruling is on hold pending appeals.

Join The Good Men Project as a Premium Member today.

All Premium Members get to view The Good Men Project with NO ADS.

Log in if you wish to renew an existing subscription.

By completing this registration form, you are also agreeing to our Terms of Service which can be found here.


Need more info? A complete list of benefits is here.

The post Assault Weapons “Not for Hunting” but “Good for Home and Battle” appeared first on The Good Men Project.