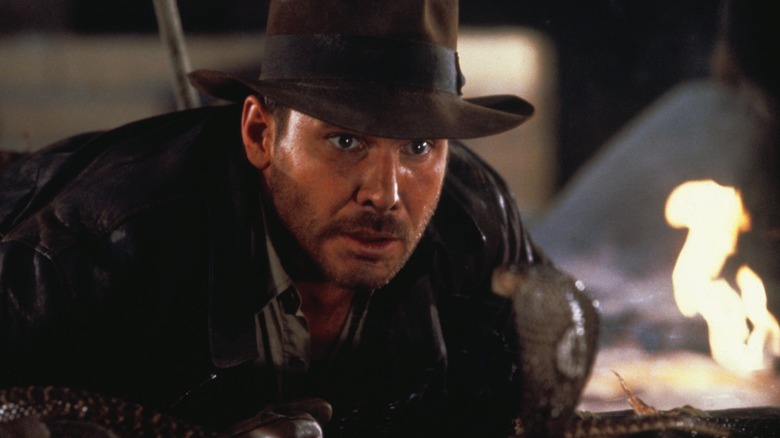 "Raiders of the Lost Ark" is, among other things, one of the greatest collections of pulp adventure tropes in a single movie. Director Steven Spielberg and producer/co-writer George Lucas, deliberately making an homage to the adventure films and movie serials of their youth, stuffed as many exciting ideas and elements into the movie as they could: bullwhip fu, gritty fisticuffs, Nazi's getting owned, boulder chases, car chases, a literal Deus ex Machina, and of course, snakes — lots of snakes.

With all of that action awesomeness jam-packed into a movie that's just five minutes shy of two hours, it stands to reason that some elements had to fall by the wayside. While some major set piece concepts that couldn't fit into "Raiders" would show up in future sequels, other ideas never saw the light of day. One of those ideas involved a character who — get this — would have a flamethrower for a hand. While that didn't end up happening (thanks in part to Lucas' intervention), Spielberg was able to give that character another menacing quirk, one that allowed him to perfect a failed gag from one of his previous films. 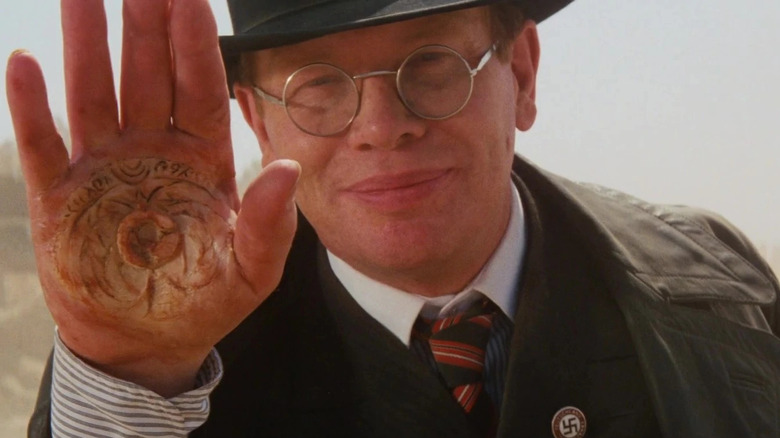 As Spielberg recalled in Empire's oral history on the film, "There were a lot of things that fell out of the ['Raiders'] script. Some of the things that I wanted to shoot wound up in 'Temple of Doom,' like the mine car chase." However, while that chase was easily salvaged by smoothly fitting the sequel tonally, Spielberg's original plan for the character of the Gestapo agent Major Arnold Toht (played by Ronald Lacey in the film), was too wild for his colleagues.

The concept of Toht was Spielberg, Lucas and screenwriter Lawrence Kasdan's "biggest dispute," according to the director. As Spielberg explained, his idea for Toht was a "heavy-metal view of the character," wherein the Nazi would have "a prosthetic hand that was in fact a machine gun and a flamethrower." Spielberg saw his idea for Major Arnold as a prescient version of another famous Arnold, saying his Toht "was like The Terminator before The Terminator. We've got the artwork to prove it."

Sadly, Lucas was having none of Spielberg's idea for a cyborg Nazi henchman. "That's where George put his foot down," Spielberg recalled, stating how Lucas pointed out to him that his idea for the character was "crossing out of one genre and into another," and Spielberg concurred. Thus, the director was forced to see how "all that hard work just became refuse in the art department," and the character of Toht would not be lucky enough to join such luminaries as Ash in "Evil Dead 2," Cherry Darling in "Planet Terror," and Gazelle in "Kingsman: The Secret Service" in the pantheon of movie characters with deadly weapons for appendages.

The World's Most Menacing Coat Hanger 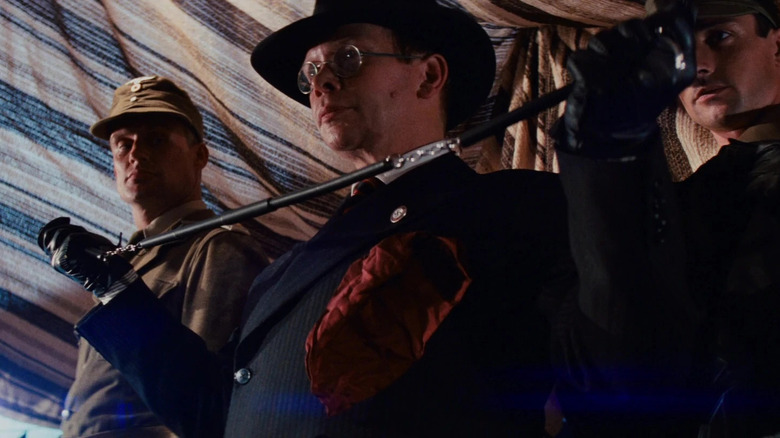 Despite Toht's flame-touting origins, his character managed to still be tangentially connected to heat in "Raiders." After all, he threatens torture on Marion Ravenwood (Karen Allen) with a fire-hot poker, an impression of the medallion from the Staff of Ra is permanently burned into his hand, and his demise is the result of the Ark literally melting his face to mush.

Additionally, although the character's penchant for unusual weapons was not to be, Spielberg was able to give Toht a unique accessory that doubled as a way of doing justice to a gag that the director had originally conceived for "1941." In that film, Christopher Lee's character of Captain Wolfgang Von Kleinschmidt originally had a moment with captive Hollis Wood (Slim Pickens) where he threatened him with what appeared to be a torture device, only to reveal that it was a disassembled coat hanger, onto which he hung his coat. As Spielberg lamented in Laurent Bouzereau's "The Making of 1941" from the film's DVD, however, "I shot it, but when I previewed the film in Dallas, nobody laughed. It wasn't funny."

When it came time to make "Raiders," Spielberg explained, "I was determined to get this gag to work in one of these movies, and I had this bet with myself: I would try this gag out in my next 10 films, and I would stop when it got a laugh." Fortunately, Spielberg's choice to give the bit to Toht, who menacingly unveils the nunchaku-like device before nonchalantly hanging his coat on it, paid off, and it got a laugh. "I was satisfied," claimed Spielberg. While Toht was robbed of his chance to beat the T-800 to the punch with a crazy arsenal of hand attachments, he at least got a brief moment to shine, like a flickering flame.

Read this next: The 16 Best '80s Action Movies Ranked

The post Raiders of the Lost Ark Could Have Included a Villain With Flamethrower Hands appeared first on /Film.