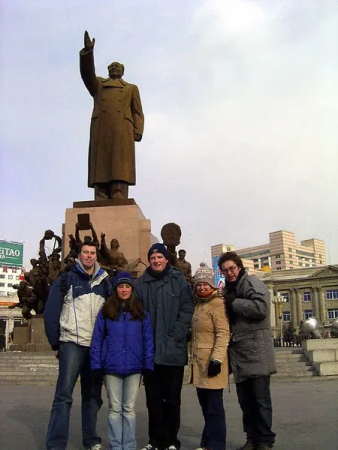 In all honesty, Im in very little mood to write, and far more tempted to just hit the magic X in the corner and call it a night. Its been a long couple of days, and I really want a full nights sleep. But as I suspect is widely known know, such is not my fate. Besides, Ive got some actual Chinese-lookin photos

So this weekend past was the big trip up to Shenyang. I was a bit apprehensive with everyone I told saying that its just a big, cold, dirty city but I tried to keep my spirits high as I left the school Friday night and headed for a shared taxi. The plan was to take a shared taxi to 100 Year City (a mall) in Dalian and meet Joanna and Brian at a noodle shop close by. I was a bit nervous, but managed to find a shared taxi no problem.

I hopped in and knew Id have to wait a few minutes until the other two empty seats were filled. Sixty minutes later I gave up and got out (for all those that feel I dont have patience, please write this moment down). I had to meet the Irish at 8:30 and it was now pushing 8:40 and I was still a (non-happening) 40 minute taxi ride away. Well, getting out caused quite a stir and with promises of leaving, they got me back in the cab.

So, I arrived at the noodle place more than an hour late and there was a not-surprising lack of Joanna and Brian. Now, in that hour or two I had sitting in the taxi I had firmly outlined the problems that would face me when I got to Dalian, namely: I didnt have their phone number and I didnt have a phone card to make phone calls on the public phones. A bit of face-losing goofiness and I was offered the use of the noodle restaurants phone (incidently the Japanese restaurant I went to with Serena a week or so ago) to call Tom back in Jinzhou and get the number. When the restaurant phone couldnt dial Jinzhou one of the waitresses was kind enough to hand me her cell. Long story not as long as it could be I got Brian on the phone, he came and got me and we laughed over the telling of it while I chowed down on some well earned Japanese take-away.

In the morning the three of us met up with Alan, Vanessa and Andrew at the train station and dove into our four-hour express train ride north. Arriving in the city and armed with matching LP guides we jumped into a set of cabs and headed to our selected hotel. The place was 124 RMB/night for doubles with an en suite bathroom not too bad. The only thing was, despite LPs insistance that most Chinese hotels have two single beds in double rooms Andrew and I found different. With a few chuckles, who gets the pink coat hanger jokes, and were both grown men comments.. we made do.

Our first point of interest was the Mao Zedong Statue in the centre of town. It is this huge tribute to THE Chairmen of Chairmen and was quite impressive. After some finger freezing photos, we grabbed some taxis and headed to the North Tomb, the burial place of the Qing Dynastys first emperor. The Qing Dynasty was Chinas last dynasty and if youve ever seen The Last Emperor thats them. They were Manchurians (at the time an autonomous region from China) and took over Beijing in the 1600s, ruling until the Nationalists took control early last century. Shenyang (as well as Dalian) is in what used to be Manchuria, so this area has quite an interesting history. 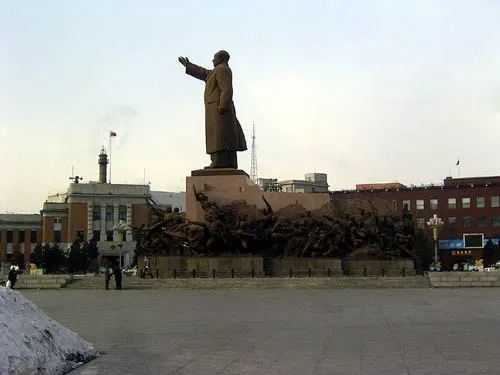 The tomb was absolutely beautiful. Im not sure if it was really that amazing, or I was just elated to see some actual Chinese-style architecture as opposed to the Communist-concrete motif that has infected most places. The tomb is set in this huge park and though freezing, I found it really nice to just get out and stretch the legs. Ive not done much exercise since Spring Festival and I am realizing I REALLY need to get into some sort of routine. 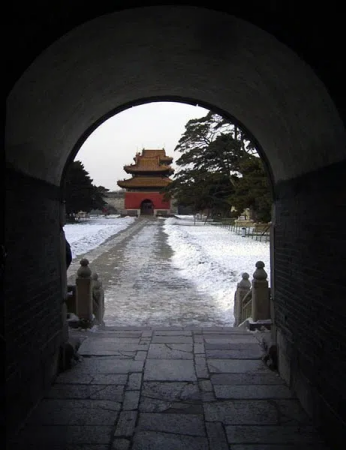 After the tomb we headed back to the hotel for a bit of a rest. While the couples crashed, Andrew and I got a good laugh out of the TV. There was no CCTV9 (English) TV, so it was a bit of a sport finding things entertaining enough to not need comprehensible language for. We settled first on a Disney cartoon of the Tortoise and the Hare that must have been from the 40s. It was hilarious seeing it dubbed in Chinese. After that we dove headlong into this Hot Male Contest rather an interesting show to be watching considering our sleeping arrangements but once the talent portions started and the goofy Asian dancing began, we were hooked to see what dude the women would save from getting pushed into a pool of water. Ah, quality TV.

At about 7 the rest of the crew stirred and we all headed out for dinner. An embarrassing amount of wasted food later and we were heading back to the hotel with some Chinese brandy, a few bottles of beer and a newly got deck of cards that came free with the purchase of a 9V battery (did the women ever seem confused when we handed her back the battery). We kept a game of Asshole going well into the night and made a significant dent in the bottle of brandy a god-awful booze.

In the morning we checked out of the hotel and headed down to The Imperial Palace, dubbed as a mini-Forbidden City. One of only two Imperial Palaces in all of China, it was not really much to look at. I mean, it was relatively interesting, but it was damn cold and the place looked like it had been gutted of anything actually valuable. At 50 kuai it wasnt cheap either (I paid less to get into the Louvre). 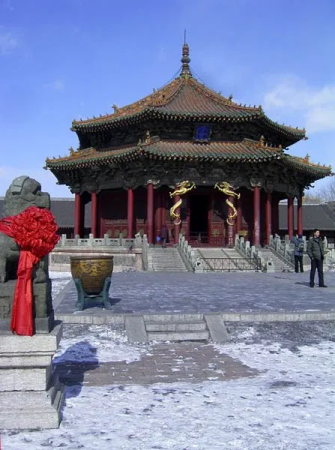 Well-chilled straight through, we warmed up with another feast of food and then headed to the North Pagoda (Bei Ta). Having seen Buddhist temples in Thailand, there was just no possibility for comparison but having been in the country for over a month now and not seen any real cultural buildings, let alone people showing any sort of belief in anything but cell phones and DVDs it was an experience. The place is looking the worse for wear though.

We spent the remaining couple of hours hanging out in the comfy lounge at the train station. Andrew and I killed the time playing pool, which was great despite losing all four games. The train ride home was decent and I was luckily able to catch the last train from Dalian to Jinzhou.

Sorry this is all very to-the-point, but Ive got to be up in like six hours and Im supposed to handle parent-teacher interviews tomorrow I need some sleep.

This post was previously published on Ryan-McLaughlin.com and is republished here with a Creative Commons license.

Talk to you soon.

If you believe in the work we are doing here at The Good Men Project and want to join our calls on a regular basis, please join us as a Premium Member, today.

All Premium Members get to view The Good Men Project with NO ADS.

Need more info? A complete list of benefits is here.

The post The Shenyang Gang appeared first on The Good Men Project.